The American Wind Energy Association (AWEA) is the premier national trade association that represents the interests of America’s wind energy industry – the country’s fastest growing energy sector. Together, with hundreds of our member organizations, we work to help drive wind energy demand and to make it as cost-competitive as possible.

Wind 101: the basics of wind energy

Learn how wind energy works, what it’s used for, and how it can improve our lives at home and at work.

What is wind power?

Wind power captures the natural wind in our atmosphere and converts it into mechanical energy then electricity. People started using wind power centuries ago with windmills, which pumped water, ground grain, and did other work. Today’s wind turbine is a highly evolved version of a windmill. Modern wind turbines harness wind’s kinetic energy and convert it into electricity. Most wind turbines have three blades and sit atop a steel tubular tower, and they range in size from 80-foot-tall turbines that can power a single home to utility-scale turbines that power hundreds of homes.

Wind is a type of renewable energy, and there are three major types of wind power.

The major types of wind power are:

When wind blows past a turbine, the blades capture the energy and rotate. This rotation triggers an internal shaft to spin, which is connected to a gearbox increasing the speed of rotation, which is connect to a generator that ultimately produces electricity. Most commonly, wind turbines consist of a steel tubular tower, up to 325 feet, which supports both a “hub” securing wind turbine blades and the “nacelle” which houses the turbine’s shaft, gearbox, generator and controls. A wind turbine is equipped with wind assessment equipment and will automatically rotate into the face of the wind, and angle or “pitch” its blades to optimise energy capture. 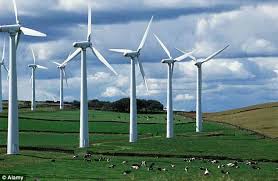 How wind energy gets to you

Wind turbines often stand together in a windy area that has been through a robust development process in an interconnected group called a wind project or wind farm, which functions like a wind power plant. These turbines are connected so the electricity can travel from the wind farm to the power grid. Once wind energy is on the main power grid, electric utilities or power operators will deliver the electricity where it is needed. Smaller transmission lines called distribution lines will collect the electricity generated at the wind project site and transport it to larger “network” transmission lines where the electricity can travel across long distances to the locations where it is needed, when finally the smaller “distribution lines” deliver electricity directly to your town and home. Learn more about transmission.

How wind projects are developed

The current estimate of wind energy potential is 10 times the amount of electricity consumption for the entire country. This strong wind resource varies across the country by region and topography. Wind energy projects are developed by companies that seek out the areas with the strongest wind resource but also review other critical factors like acccess to land, access to the transmission lines, ability to sell the electricity, and public engagement other significant development factors. Once a site is identified, a developer will conduct wind resource assessment, siting and permitting, transmission studies over a period of several years. The majority of wind projects are located on private land, where the developer leases the land from the original landowner providing lease payments. After early stages of development, a developer will seek out a constract with a purchaser of electricity, raise capital from the finance markets, order wind turbines, and hire a specialized construction company to build the project. Once a project is built and delivering electricity to the power grid, a project owner or operator will maintain the project for its 20 to 30 year life.

Wind energy is a clean, renewable form of energy that uses virtually no water and pumps billions of dollars into our economy every year. Since 2008, the U.S. wind industry has generated more than $100 billion in private investment. Furthermore, wind energy is a drought-resistant cash crop in many parts of the country, providing economic investment to rural communities through lease payments to landowners. Wind energy helps avoid a variety of environmental impacts due to its low impact emitting zero greenhouse gas emissions or conventional pollutants and consuming virtually no water.