Why not read about some of our other services HERE?

EPI’s Steve Metcalfe becomes the first QC consultant to work on the new Ramform Atlas, second in the Titan-class series from PGS. Steve joined the ship in Algeciras in Spain for an eight week survey. It left the Mitsubishi yard in Nagasaki, Japan. Had a port call in Singapore and crew change in Sri Lanka and was in Algeciras in Spain gearing up for its very first seismic operation in the North Sea.

The PGS Titan-class vessels are like their name suggests remarkable for their size. You may remember the vessel’s namesake was strong enough to hold the world on his shoulders. The Ramform Atlas is not quite of that scale, but it is vast compared to the average seismic vessel. The length of 104m is fairly average; it’s those broad shoulders that make the difference. The ship is 70m in the beam at the stern. Looking at the vessel layout on the fire plan, it resembles one of those delta-shaped stealth planes. This unusual shape produces a very much larger interior and back deck working spaces. It contains 24 streamer reels, sixteen in a single row for faster spooling, has 6 engines in two separate engine rooms with full redundancy, and a maximum accommodation of 80 persons (up to 75 in single berths) with a cruising speed of 16 knots. The total package is designed for smoother, safer and more efficient working, according to the designers. 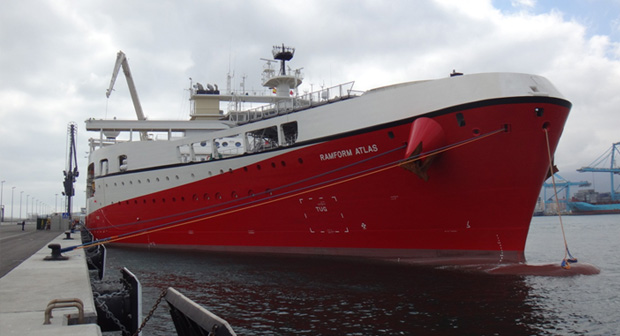 So what’s life like on-board? Steve reported that ‘Once on-board we took the elevator to the fourth floor, or rather Deck 4 as it’s known onboard; however, I could have been mistaken to be in a corridor leading to reception of a PGS office as there were many pictures of the PGS fleet proudly displayed on the bulkhead that lead to my cabin.’ 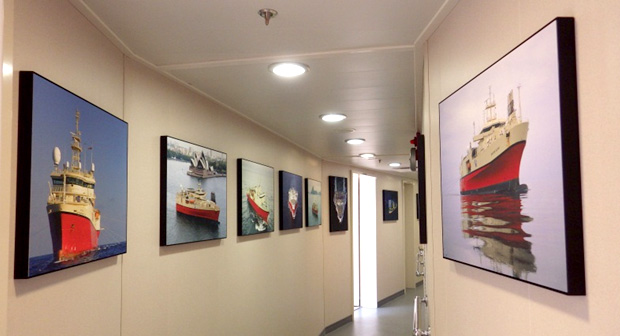 ‘PGS definitely didn’t spare any expense on this vessel as was demonstrated by the furnishings within the client cabin, topped off by a 47 inch screen with satellite TV channels and dual reclining chairs.’

‘Outside my cabin and down the passageway towards the middle of the ship was the main stair well. Actually, “stair well” would be the wrong term for it. It was more like a balcony, overlooking the common area adjacent to the recording room and chief offices. Ahead or forward was a 7-pane glass window feature that allowed beams of sunlight to flow down to the 3rd deck, with the view under the helideck. 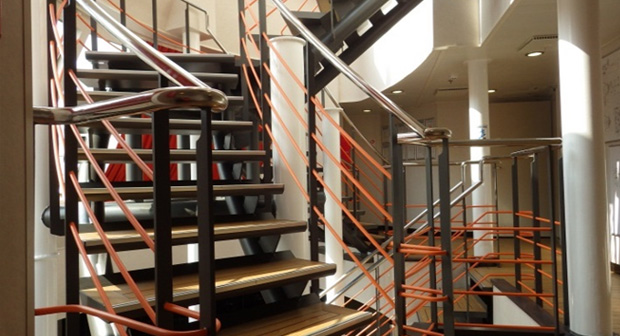 A double-arched staircase curved up to a landing area midway where it met the staircase that lead down from the mess room. “Mess room” again seemed the wrong term as it appeared as if I had entered a resort restaurant area. However, it was obvious I was onboard a vessel, as at the top of the stair case was another balcony setting that allowed you to look out over the helideck on the bow of the vessel. The mess room was enormous with many tables and a great view of the outside swimming pool at the back of the mess room. This was definitely restaurant quality, especially at dinner time on Saturday evenings when the catering staff would spoil everyone onboard with steak night.’

‘Due to the cold weather of the North Sea the swimming pool was “closed” but appears to be an excellent off-shift destination in sunnier climates.’

‘As for the inside destination there was the auditorium which resembles a movie theatre.’ 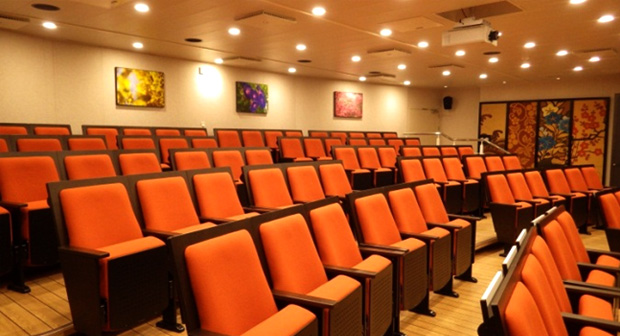 ‘But the main indoor venue that attracted everyone was the gymnasium. The gym featured a sunken basketball court, 4 treadmills, 2 concept-2 rowing machines, 5 exercise bikes, 2 elliptical machines as well as numerous free weights, a smith machine and weights rack, table tennis and sauna. This was definitely a facility that would put my local gym back home to shame.’

PGS continues to set the standard for new, purpose built seismic vessels. EPI were proud to be part of the Ramform Atlas’ maiden survey. Further details of the Ramform Atlas can be found on the PGS website.  The EPI Group provides specialist consultants to the energy sector for all manner of services, some Marine QC to HSEE and MMO and PAM monitoring.

With thanks to Steve Metcalfe for his report and photographs, and to PGS for kind permission to reproduce these details.